Colossal swells erupt from a vast ocean of human suffering and universal dread and in their wake present to us the latest offering from the minds of CARNIFEX: World War X. Soul darkening, eye-bloodying, flesh crushing death metal is to be expected from this group of musicians, yet with the new album comes a unique notion of unavoidable hopelessness; the inevitable rot of mankind.
CARNIFEX has stoked the coals and breathed a distinct power into World War X that boils over into subjects and sounds of human degradation.

Nine blistering tracks are contained within »World War X« and each song is compiled of multiple menacing layers which are substantially longer than previous CARNIFEX songs. There is a noticeable gain in the complexity of song structure as they deliver you further into an audio-sensory sojourn. The title track opens the album and quickly ignites the tone of World War X both lyrically and musically. Much like a conversation, the song displays multiple, cynical points of view on the subjects of war, death, and certain destruction. A music video for the track, shot in the barren, death filled landscape of the Salton Sea and directed by Lewis, will also be showcased alongside the single. 'No Light Shall Save Us' featuring Alissa White-Gluz will also accompany a music video (directed by Scott Hansen) upon its release. Exemplifying the album as a whole, and containing the majority of the album?s elements in one song, 'No Light Shall Save Us' was written not long after the conclusion of the Slow Death album cycle. Another track entitled 'All Roads Lead To Hell' includes guest guitar solos by solo artist Angel Vivaldi. 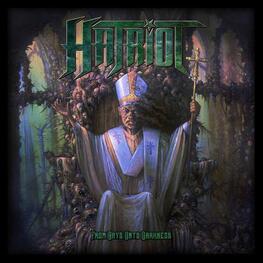 HATRIOT - From Days Unto Darkness (CD)