2016 three CD set. Classic Filth combines the Peaceville-era trilogy of releases from the UK's premier extreme metallers. One of the most infamous and notorious names in metal, Cradle Of Filth shock, excite, disgust and inspire in equal measures across 30 tracks of darkness and debauchery. First on the menu is the band's ninth studio album from 2010, Darkly, Darkly, Venus Aversa. Described at the time by Cradle's infamous frontman Dani Filth as "without doubt the fastest and most brutal album we've created to date", this is a relentless gothic horror themed slay-ride of fervour and perversion; yet amidst the orchestral melodrama and lush, cinematic production, there sits stalwart a ravening beast of furious riffing, flesh ripping vocals and monstrous, unstoppable percussion. Originally released as a companion piece to Darkly, Darkly, Venus Aversa, the Evermore Darkly release features new tracks, reworkings and rarities, including the exclusive track 'Thank Your Lucky Scars', plus a special remix of album track 'Forgive Me Father', courtesy of Rob C from Anthrax. Also featured are tempered demo versions of 'Darkly, Darkly...' songs, along with a choice cut from the band's orchestral project which eventually manifested as 'Midnight in the Labyrinth', in the form of a haunting, classic reworking of fan-favorite, 'Summer Dying Fast'. Closing the circle of this trilogy is the band's 2012 opus The Manticore and Other Horrors. This, Cradle of Filth's tenth studio full-length, can be likened to a bestiary, a collection of stories on Monsters; personal demons, Chimeras, literary fiends and world-enslaving entities. The album itself possesses an altogether new atmosphere for the band, incorporating a heavier, faster NWOBBM punk vibe that is both current and cruel, blended with ornate orchestration and the quirky immediateness of 2000's acclaimed Midian opus. 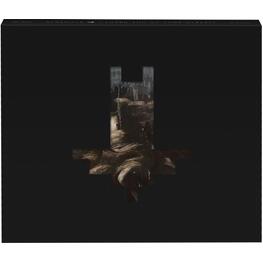 BEHEMOTH - I Loved You At Your Darkest (CD)