DECEASED - As The Weird Travel On (CD)

DECEASED - As The Weird Travel On (CD)

Trends have come and gone, but Deceased's brand of true-to-the-roots heavy metal has done nothing but mature, distancing them from the throng of half-hearted pretenders, bandwagon jumping retro-metallers, and pseudo-metal shams. Having championed the cause of true metal for fifteen (!) years, Arlington, Virginia's Deceased are universally recognized as not only pioneers of the true spirit of death metal, but as keepers of the flame of heavy metal's past, present and future.Deceased arose in 1985, drawing inspiration from BLACK SABBATH, VENOM, RAVEN, MERCIFUL FATE, SLAYER and SODOM. During the period of 1985-1989, Deceased recorded and circulated three demos ('The Evil Side Of Religion', 'Birth By Radiation' and 'Nuclear Exorcist') that galvanized their reputation as trailblazers of original, technical American death metal. The 1988 hit and run death of bassist Rob Sterzel brought Les Snyder into the fold, completing the quintessential Deceased line-up (rounded out by King Fowley on drums/vocals, Mark Adams and Mike Smith on guitars). Extensive self-promotion and frequent gigging up and down the east coast brought the band to the attention of a brand new label- Relapse Records - to which Deceased were the first band to sign.In May of 1991, Relapse issued the 'Gutwrench' 7' EP, which built up frenetic underground anticipation for their full-length debut, entitled 'Luck Of The Corpse'. Released in February, 1992, 'Luck Of The Corpse' sold an amazing 15,000 copies without the benefit of a tour to support it. Little more than a year later, Deceased released a five song follow-up titled 'The Thirteen Frightened Souls' (which included a rousing version of VOIVOD's 'Voivod').Two years passed as the band crafted new songs and continued to gig frequently, opening for renowned death metal acts like MORBID ANGEL and NAPALM DEATH before entering Inner Ear Studios (FUGAZI, NIRVANA) to record their sophomore effort 'The Blueprints For Madness' in 1995. Despite incredibly raw production, the massive strength of the songs themselves garnered extreme enthusiasm from both fans and critics alike. The remainder of 1995 saw more regional and local gigging, honing the band's skills even further. 1995 also saw Last World Records (a small Maryland label) issue all of the now-classic early demos (along with some raw live sets) under the moniker 'Death Metal From The Grave'..1997 brought 'Fearless Undead Machines', a perfect union of the power and ferocity of true death metal with the song-writing finesse and grace of it's classic metal forerunners, 'Fearless Undead Machines' firmly placed Deceased a step ahead of retro-metal purveyors who had only then (ten years later) begun to catch up with them.'Fearless Undead Machines' was an immediate classic in the history of metaldom. An eleven piece concept album inspired by George A. Romero's 'Night Of The Living Dead'/'Dawn Of The Dead'/'Day Of The Dead' trilogy, 'Fearless Undead Machines' was given the midas touch from producer Jim Barnes (MORGION, MINDROT), allowing the band's music to be expressed and comprehended as never before. No matter the intention, 'Fearless...' exhibited with a majesty that underground metal hadn't witnessed for years. The brilliant lead guitar work and interplay (see 'The Silent Creature' and the title track) that Mike and Mark layed down harkened back to the glory days of IRON MAIDEN and JUDAS PRIEST without sacrificing any of the bite for which extreme metal become known.Deceased received unrelenting support from both die-hard fans and press as fans of metal collectively raised their fists and banged their heads in unison to 'Fearless Undead Machines' unwavering dedication to true, underground riffage and straightforward metallic themes. The band gigged up and down the east coast, topping it all off with a triumphant set at the first annual March Metal Meltdown (1999) in Asbury Park, NJ. While Deceased continued to play the off-weekend sets at thrash-friendly venues, they were consumed with writing and preparing for their next full-length release. A classic performance at 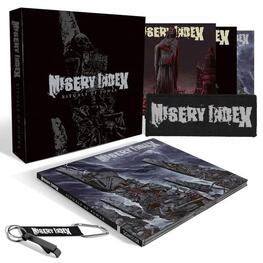