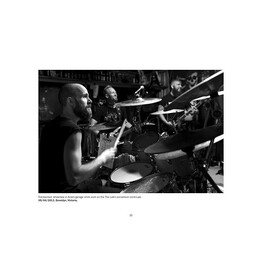 LIFELINE is a photographic documentary book that relates the behind-the-scenes story of Frankenbok, a Melbourne-based thrash/groove metal band, from October 2012 to December 2015.
When photography began, Frankenbok had a future full of possibilities that included moving into a custom studio and recording a new album. Two-and-a-half years later, Frankenbok's situation had changed dramatically: two band members left and the band itself was on the ropes.
LIFELINE documents what happened and why, and looks at the balance between being in a band member and being a friend.

Author MICHAEL WEINHARDT is an Australian photographer who has covered stories in the USA, Peru, Cuba and Australia since 2008. Michael's work has appeared online and in print, including Real Change News (Seattle), HEAVY and VERI.Live (Melbourne) and The Courier (Ballarat).
Michael currently resides in Canberra, Australia. FRANKENBOK - End Of All You Know (CD) HIGH ON FIRE - Death Is This Communion (Deluxe Ed) (CD+DVD)