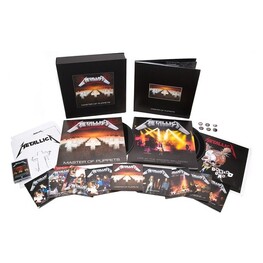 A little over a year ago, Metallica proudly reissued their first two albums remastered for the most advanced sound quality possible along with special deluxe editions including previously unreleased audio and video recordings. They promised to give that love to the entire catalogue, and they're back now with all the details about the release of Master of Puppets, coming to you on November 10th.

Available in both physical and digital versions, we've got several options for your Metalli-pleasure... CD, vinyl, 3-CD expanded edition and deluxe box set.
The 3-CD set includes the remastered album, a disc that is a combination of rough mixes, demos and an interview, and a disc featuring a mix of live songs that are sequenced into a typical set list from the Damage, Inc. tour. The limited edition deluxe box set includes unreleased demos, rough mixes, interviews and live tracks, many of which have never even been available in the collector or bootleg community and were pulled from Metallica's personal collections.
There's also a 108-page hardcover book with rare and never before seen photos and essays from those who were there with the band for the wild ride.
All in all, there are three LPs, ten CDs, a cassette, two DVDs, a lithograph with art by Pushead, a folder with handwritten lyrics, and if that isn't enough to push you over the edge, they've also thrown in a set of six buttons (!).

These deluxe box sets are limited edition collectors' items, so get yours before they are gone! 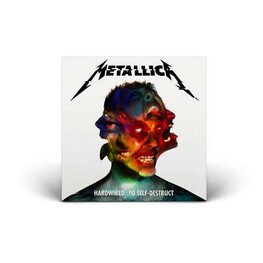