With artwork by the legendary Storm Thorgerson (Pink Floyd, MUSE)

"Elements of Rush, Muse and Porcupine Tree meld in a blast of how prog should sound in 2010" Classic Rock

The Pineapple Thief reissue their 2010 album, Someone Here is Missing, newly remastered by Steve Kitch at Audiomaster, following their recent success with two studio albums featuring King Crimson drummer Gavin Harrison. August 2018's Dissolution saw the band reach #1 in the UK Rock & Metal chart, #36 in the UK album chart, #22 in Germany, #4 in Platomania Netherlands and #14 in Finland's physical chart, and took them on two headline European tours including their biggest ever booking at London's Shepherd's Bush Empire. Your Wilderness, released in Summer 2016, achieved something of a breakthrough for the band before Dissolution, producing 4m+ album streams, a #7 in the UK Independent Charts and two extensive headline European tours culminating at London's Islington Assembly Hall where the concert was recorded for the live release Where We Stood.

Someone Here is Missing marked a significant step forward for the band, as frontman Bruce Soord honed and perfected his songwriting and which he describes as "a record of dark edges, full of love and regret." The artwork was designed by the legendary Storm Thorgerson, famous for creating some of the most recognisable artwork of the last 30 years, including albums by Pink Floyd (Dark Side Of The Moon, Division Bell), Muse, Led Zeppelin and many more.

This remastered edition of Someone Here is Missing is released on 180g heavyweight vinyl in single packaging complete with printed inner bags.

"The Bends-era Radiohead... with Porcupine Tree's love of sinister sci-fi soundscapes... gives Matt Bellamy a run for his money" Guitarist

"Unmistakably progressive, but not - a much needed modern slant on a classic genre... nothing short of phenomenal" Fireworks 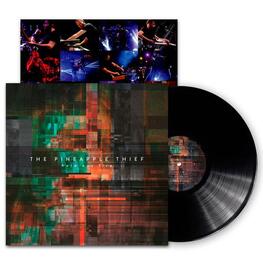