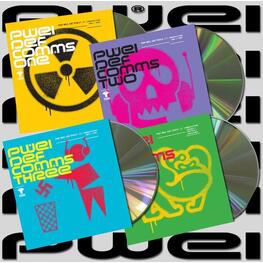 Career-spanning 4CD collection, compiled with founder member and vocalist Graham Crabb. Contains material from all eight of the band's albums, plus the 'lost' 1996 album, as well as unheard alternate versions and a recently recorded demo.

Album-by-album sleeve-notes by guitarist Adam Mole & all new artwork by The Designers Republic.

Emerging from Stourbridge in the mid-1980s, Pop Will Eat Itself quickly progressed from two minute, punk-inspired indie hits to sample-heavy hip hop, house, techno and industrial rock. Along the way, the band scored countless hit singles and albums, toured the world and became a much-loved mainstay of the UK music scene during the late 1980s and 1990s. Having reached the end of the line in 1996, the band reformed in 2011, so far releasing two new albums and continuing to record and perform live to an enthusiastic international fanbase, including recent trips to the USA and Australia.
"Communications" brings together material from across PWEI's entire career for the first time, compiled with vocalist Graham Crabb and including unreleased material supplied exclusively for this release.

Stylish, modern and complete, this is the definitive PWEI experience for both long established fans, the new and the curious.

PWEI continue to perform around the UK in 2018 off the back of a sold out Australian tour in March 2018.