Rhapsody Of Fire hold a special position in the exciting and multi-faceted world of
heavy metal: Like few other acts, the band from Italy stands for anthemnic symphonic
metal presented with lots of speed, great pathos and technical refinement. Another
characteristic that the band?s fans love: At the beginning of their career in particular,
their songs presented a mythical, album-transcending saga. Who doesn?t like to recall
classics such as Legendary Tales (1992), Symphony Of Enchanted Lands (1998)
or Dawn Of Victory (2000)? Rhapsody Of Fire have now returned to the very
strengths of those albums. Their latest studio recording The Eighth Mountain
combines spirited songs and epic chorus parts with lavish orchestra arrangements. At
the same time, the album marks the beginning of a new, exciting saga that?s typical of
this band.
First of all, there?s been an important personnel change: Vocalist Giacomo Voli has
been at the group?s musical helm for the last three years, whom has not only
accepted the powerful heritage, he has also brought fresh momentum to the
Rhapsody Of Fire fold.
To dress the new material in appropriately lavish sounds to suit its extravagant
songwriting, Rhapsody Of Fire have worked with a major orchestra again. This time
the musicians of the acclaimed Bulgarian National Symphony Orchestra in Sofia,
were instrumental in recording The Eighth Mountain?s sublime, atmospherically dense
overall sound. Two choirs featuring more than 20 vocalists, as well as a number of
soloists playing medieval instruments, also deserve to be mentioned. The album was
mixed and mastered by Sebastian 'Seeb' Levermann (Orden Ogan). 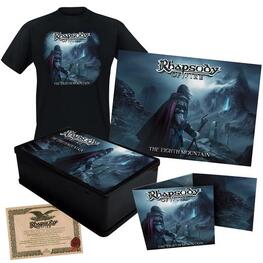