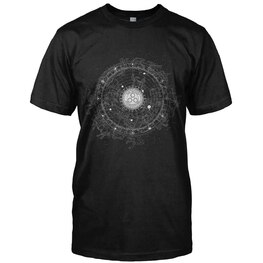 EACH LP IS LIMITED TO ONLY 250 COPIES WORLDWIDE!

While their brand new album "Phanerozoic I: Palaeozoic" is making tsunami-style waves across the globe, we are reissuing THE OCEAN's 2010 albums "Heliocentric" and "Anthropocentric" on vinyl!
The "centrics"-albums saw the introduction of current vocalist Loic Rossetti to the band's lineup, a game changer in their 17 years history. "Anthropocentric" is heavier than its same-year predecessor "Heliocentric", with the crushing 15-minutes openening track duality "The Grand Inquisitor" part I and II and following track "She Was The Universe", one of the most-streamed THE OCEAN tracks to date, setting the bar high for the rest of the album.

Conceptually, "Heliocentric" and "Anthropocentric" are a comprehensive critique of the legacy of christianity: While "Heliocentric" approaches the topic in a historical-chronological way, the main focus of "Anthropocentric" is the "Grand Inquisitor"-chapter in Dostoyevsky's world-famous novel "The Brothers Karamazov", spread out over 3 tracks of the album. Other songs like the serene "The Almightiness Contradiction" take up ideas by Richard Dawkins, the spearhead of modern day's aetheism.

"The Ocean do for earth science class what Mastodon did for Melville: make learning brutal", Decibel wrote about 2007's Precambrian; Revolver describing it as a "Teutonic paean to Earth's geology".
2013's seminal Pelagial, described as "a filmic ode to shifting moods, dichotomous influences and the musical personification of sinking towards the planet's deepest underwater points" by Rock Sound, was a milestone for the band, and their most conceptual work to date, and was ranked No. 3 at LoudWire's "Best Metal Albums Of 2013", and No. 5 in About.com's "2013 Best Heavy Metal Albums".