It's a full 30 years ago that Leon Goewie founded the Dutch rock band Vengeance in the early 1980s; 30 years in which the band went through variably successful times and which had Goewie himself experience the usual highs and lows of life as a musician, Yet: he never lost his inherent optimism nor his basic enthusiasm for Vengeance, Crystal Eye, the group's 2012 album, is - as Goewie puts it - "straightforward rock'n'roll which communicates first and foremost a positive feeling and a strong sense of humor, going directly for the audience's central nervous system." At the same time Goewie, whose uniquely expressive voice can be picked out among thousands, cannot deny that his band has developed: "After 30 years in this business, you should mature at least a little," he grins knowingly, "so in that respect Crystal Eye is slightly more serious than most of our previous releases - but of course only to an extent where we don't miss out on the fun of it all." 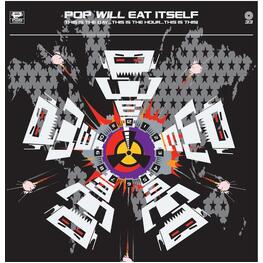 POP WILL EAT ITSELF - This Is The Day...This Is The Hour...This Is This! 30th Anniversary Deluxe Edition (Splatter Coloured Vinyl) (Rsd 2020 Drop 1) (