Double vinyl LP pressing including poster. The second LP includes bonus live tracks. The Wake is the fourteenth studio album, and eighteenth release overall, by Canadian heavy metal band Voivod. The artwork was done by drummer Michel "Away" Langevin. It is also a concept album, and the first Voivod studio album to feature bassist Dominique "Rocky" Laroche, who replaced Jean-Yves "Blacky" ThÚriault in 2014. It was recorded and mixed by Francis Perron at RadicArt Recording Studio in Canada. Given the mind-blowing nature of the progressive sci-fi metal that these innovative Canadians have been putting down for 35 years, this album brings an especially high level of anticipation. Two years of work went into this intricate, intense, boundary-breaking recording: "Obsolete Beings," "The End of Dormancy," "Iconspiracy," "Orb Confusion," "Spherical Perspective" and more. 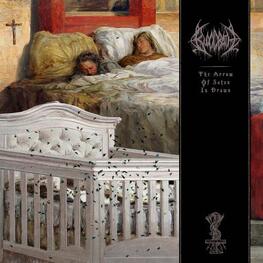