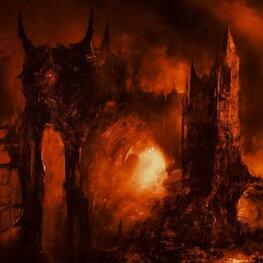 CD Box w/ exclusive bonus CD, patch & sticker.
Alas, it has arrived under the ominous (and prescient) title Dawn of Infinite Fire. Quite accurately, Dawn of Infinite Fire sees Asagraum burning with equally intensity in songwriting, execution, and atmosphere, staying true to their original aims whilst pushing their classicist sound further into the present. Granted, that blast-from-the-past classicism is inescapable - this is pure, traditional BLACK METAL above all - but not once across Dawn of Infinite Fire does that hinder their timeless expression. If anything, this is the sound of Asagraum at their most anthemic and triumphant, marching forward with obsidian austerity, reflecting their prolific presence on the live front: tangibly physical black metal, played with passion and authenticity and not augmented by cheap studio trickery. Brazen that expression might be - not to overstate the fact, but most nowadays black metal hides in the shadows - but Asagraum continue to sound fresh among that modern BM landscape, outstripping the prevailing trends and the pretenders who enable them.

A cross-continental entity, Asagraum was founded in the autumn of 2015 by vocalist/guitarist Obscura, who was joined by drummer T. Kolsvart, to create pure Satanic black metal with the old-school feeling of the eternal '90s greats and with dark psychedelic influences. A three-track promo recording was released in early 2017, laying bare Asagraum's aims and sound. Wasting no time, debut album Potestas Magicum Diaboli was recorded, mixed at the esteemed Necromorbus Studio, and released by KVLT Records in September 2017. Upon its release, the album reaped widespread acclaim across the world, garnering attention largely because it was the work of two women - a rarity in black metal, both past and especially present - who quickly rendered gender an irrelevant argument.