Massappeal is an Australian hardcore punk band formed in 1985. They were one of the first Australian hardcore bands. The four original members were Darren Gilmore, Kevin McClaer, Brett Currotta and Randy Reimann. The band learned about hardcore in the US and UK via tape trading and by reading zines.

The band's first gig was on Mardi-Gras night in 1985 in Sydney. They first made their music available (a live taping) on a compilation tape for a fanzine entitled Zit.
Waterfront Records asked the band to record a demo in May 1986 and an album, Nobody Likes a Thinker, which was released in December 1986. It was reviewed positively in Australian music magazines and daily newspapers. The album garnered the number 1 spot on the Australian indie charts.

The band toured Australia, first with another Australian band, and later with the US band DRI.
Darren left the band in 1987 and Tubby Wadsworth, a drummer from the metal scene, took over on drums. 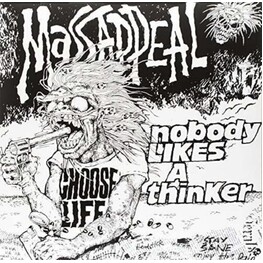