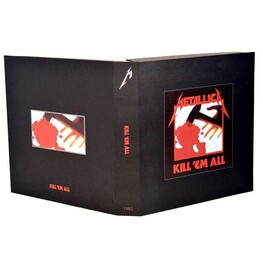 DELUXE BOX SET OF KILL 'EM ALL INCLUDING FOUR VINYL RECORDS, FIVE CDs, A DVD, A HARDCOVER BOOK (INCLUDING NEVER BEFORE SEEN PHOTOS) AND A PATCH!

Metallica will reissue their first two studio albums, 1983's Kill 'Em All and 1984's Ride the Lightning, on April 15th.
Both reissues come in the form of deluxe box sets, which include original source materials from the band's personal collection and rare or previously unheard music, along with a book of essays and rare photos of the seminal thrash outfit from their early San Francisco days.

Both reissues appear to have been in the works since at least 2014, when Metallica publicly asked fans for help in assembling content from their early years. Enough fans responded to their call to warrant some seriously beefy box sets.